Netball is the most popular women’s sport in Australia with an estimated one million players nationwide.

Netball was first played in England in 1895. Australia and New Zealand have dominated the INF world rankings in previous years and they are the only two netball nations to have ever held the number one world ranking since its introduction in 2009

If you are a Netball lover, then Bullseye Entertainment Perth’s Netball target is definitely something for you.

The colorful artwork which feature some of the games superstars are here ready to play along. So if you are ready to play minus the umpire calls of CONTACT! STEPPING! Then be sure to reserve your booking at your next Netball event with Bullseye Entertainment Perth.

This is perfect for club registration days and end of season wind ups. Its perfect for all events, be it a private party, a school-organized event, or a corporate event. 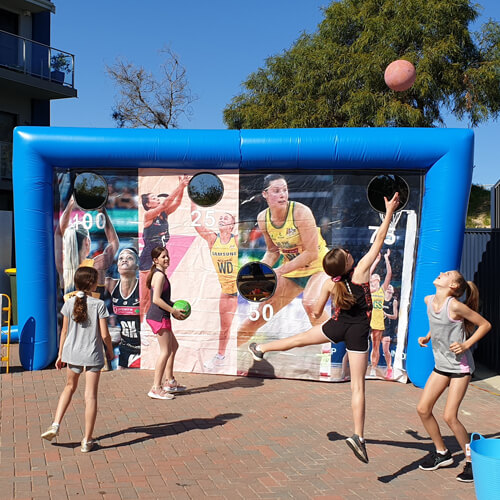 Large Events: $350 for 4 hours including attendant, There after $75 per hour